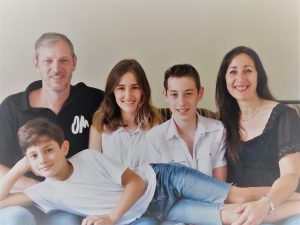 Markus was born in Germany and moved to the Netherlands as a pre teen.
Eager to serve the Lord at age 14, he started a boletin for the sunday school kids at his church. At age 16 together with his sister, they lead a puppet ministry.

Serving the Lord always played an important role in his life, so it was no surprise that he joined the mission ship Logos 2 after finishing his studies.

Vanesa and Markus met on the mission ship Logos 2 in the year 1996-1998. After their commitment with OM, they got married and served the Lord in the Netherlands.
In 2006 they joined OM again and moved to Buenos Aires to “excite people for Jesus”.

Currently Markus works as the National Director of OM Argentina, and Vanesa as the head of personnel.
They have three kids who are excited about missions and eager to find their place in the great commission.